I've always been a big fan of Red Velvet Cake, and my absolute favorite RVC comes from Piccadilly's Cafeteria. Their version is very dense and moist and full of tangy, buttermilk flavor. They used to put pecans in the icing, but they stopped doing that because of nut allergies and law suit threats. What a sad, sad day that was when the waitress handed me that piece of cake sans pecans.

But I digress; the point of this blog post is to share the results of my Ultimate Red Velvet Taste Test. Here are the contenders all stacked up. 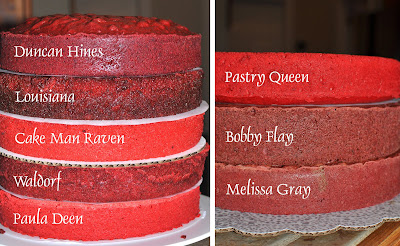 My first step was to build a spreadsheet to help compare and contrast the different recipes and help decide which cakes to test (click HERE to download the spreadsheet). A lot of the recipes I looked at were exactly the same, so the spreadsheet only has recipes that are different in some way. The recipes fall into specific categories of: butter, oil, shortening, combination, and other. In the butter, oil and shortening categories I selected one recipe as the base, and noted how the other recipes in that category deviate from the “base”.

The largest percentage of recipes I found used BUTTER as the fat. The butter recipes I included on the spreadsheet are:

The recipes are very similar with just minor changes in sugar, cocoa, and vinegar content. In the end I selected Paula Deen’s version as the "typical butter” RVC . I also selected Rebecca Rather’s version because it added sour cream in addition to the butter.

In the OIL category of RVC are:
Because it is so famous, I selected the Cake Man Raven version. I also selected Bobby Flay’s version which uses a combination of oil and butter.

Next were the SHORTENING RVCs. This category had the smallest number of recipe variations but it includes the most famous of them all: Waldorf Astoria Red Velvet Cake. I also found a variation of the Waldorf recipe that included Cane Syrup. The syrup recipe looked interesting (could Cane Syrup possibly be the secret to Piccadilly's unique RVC?) so I included it in the baking lineup.

Last but not least is the OTHER category of RVC recipes. I recently received a copy of Melissa Gray’s book All Cakes Considered which includes a RVC recipe that contains no buttermilk. Hummm. I was curious enough to add her version to the experiment.

So in the end I settled on 8 different RVC recipes to use in my taste test:


On the morning of November 16, 2009 the baking began. I set up an assembly line, preheated the oven, and began to mix, whisk and bake. Seven hours later I was finished. Whew, what a marathon. The next morning I hauled everything to work: eight cakes, a huge tub of cream cheese icing, plates, forks, and a stack of scoring sheets.

Once at work (I got there an hour early), I unwrapped and iced all the cakes and added sprinkles to each so the taste tester could identify them. Blue sprinkles, green sugar, yellow balls, each cake had its own unique topping. 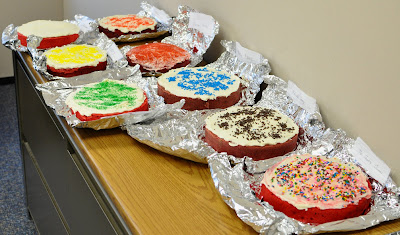 Each cake was sliced into thin wedges and a wedge of each was placed on a plate. 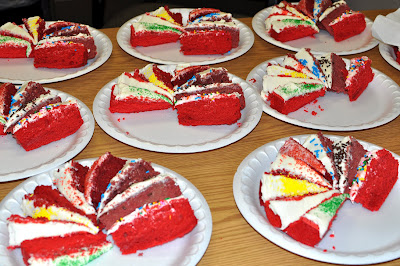 The tasters themselves were carefully selected because of their love of cake and their familiarity with Red Velvet Cake in particular. There are over 200 people in the office and only 25 of them got cake. Some people where kinda pissed that they weren’t “selected”, but hey, you can only get so many slices from a cake. It is also worth noting that the cakes were frosted but the testers were asked to base their cake critique on just the cake and not the cake and icing combination.

The result sheets trickled in during the day (some people didn’t want to eat their cakes until lunch), and I was amazed at the variety of responses. What really gave me pause were the critiques of the icing (remember I told them that the icing wasn't part of the test). One person, in addition to the cake ratings, rated the icing. She loved some of the icings and hated others. She said one had a “flour” taste and another she said didn’t have enough sugar. I didn’t have the heart to tell her that all the cakes had the exact same cream cheese icing. The only thing I can figure is that the icing took on different flavors and nuances when eaten with the cake. Strange how the mind and taste buds work.

But on to the results. I know you are dying to know which cake WON.

The winner of the first Ultimate Red Velvet Taste-Off is...

Cake Man Raven’s Red Velvet Cake
The oil based cake beat out the butter. Are you surprised? Shocked?

Here is a detail ranking of cakes.


PS: I’m also thinking about doing another round of RVC testing. I still can’t believe that Bobby Flay’s recipe came in so low (did I do something wrong?), and I found another recipe by Rose Levy that uses butter and oil (like Bobby’s) but only uses egg whites instead of whole eggs. I still have some buttermilk and red food color left over from the first round, so I’m going to preheat my oven and start RVC baking again.