I'm just a hobby baker, but a friend wanted me, ME- Queen of the Cake Wrecks, to make an elaborate fondant cake for her daughter's engagement party. Yikes. Talk about pressure. I wanted everything to be perfect, but as usual things did not turn out quite as I dreamed. I had lots of technical difficulties, lots of structural issues, lots of tears and gnashing of teeth, but all that drama is for another post.

This post is about FONDANT.  Which fondant tastes the best and which is the easiest to work with (in my inexperienced opinion). 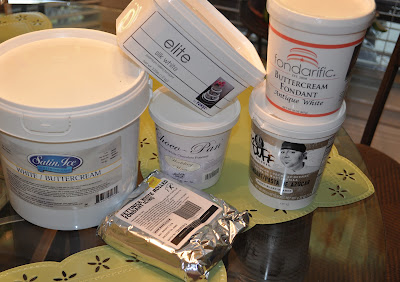 Before this adventure the only fondant I had worked with was Wilton's (which tastes really bad, but is easy to work with) so I decided to get samples of six other popular fondants and do a comparison. My goal was to find a fondant that was easy to work with, and also had a great taste.

Disclosure: We are a participant in the Amazon Services LLC Associates Program, an affiliate advertising program designed to provide a means for us to earn fees by linking to Amazon.com and affiliated sites.


The fondants selected for the test were:

Here are strips of each fondant atop a simple white cake with American Buttercream icing. All of the fondant colors had “white” in their name, but as excepted the shades vary greatly.  I had ten people taste all the fondants to get their unbiased opinions. 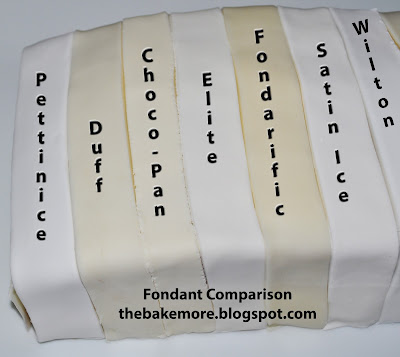 So how was my comparison conducted?   What was the ranking criteria?


First was the taste test, then the kneading test, the rolling test (did it stick, was it easy to roll, how much did it spread, the draping/smoothing/trimming test. Finally the fondant covering the pan was inspected for imperfections.

The goal was to find the best coverage with the least effort. Would one fondant brand be better at covering mistakes than others?

Note #1: I draped all the fondant onto the same Mini Angel Food Pan. No icing covered the pan. It was just fondant atop metal. I wanted to see how many of the pan's nooks and crannies would show through the fondant. 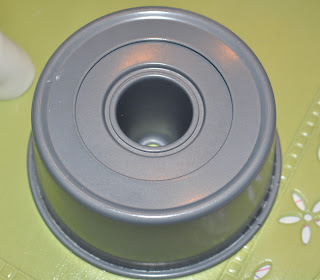 Note #2: For each contender I used 5 ounces of fondant and rolled each to 1/8 inch. I was surprised at the difference in the amount of spread or coverage between the brands. In one case the fondant only rolled to 7-1/2 inches round, and in another the fondant rolled to almost 11 inches round. I guess it is a density issue. The heavier/denser the fondant is the less volume it has to spread. The lighter fondants had more volume per ounce, so there was more fondant to roll into a larger circle. Any mathematicians out there willing to explain this for us?

Note #3: Because prices of fondant varies greatly from day to day and from vendor to vendor I don't quote any prices.  I only give a general ranking. This ranking does not include taxes or shipping.

Now onto the testing results (in no particular order): 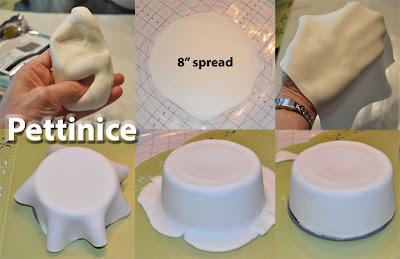 Pettinice  - One of the top two in TASTE. 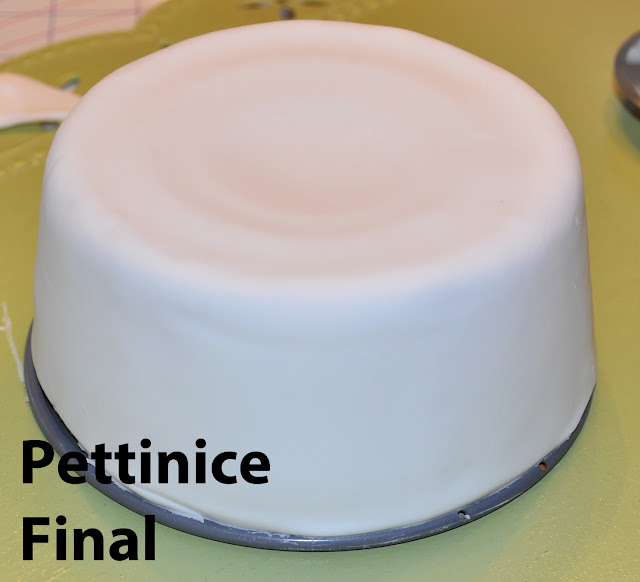 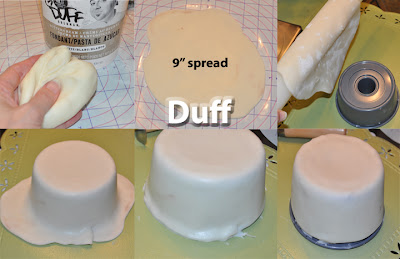 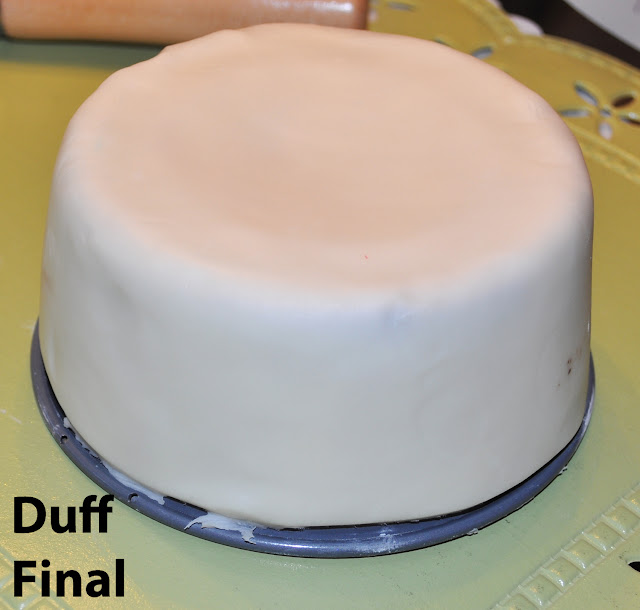 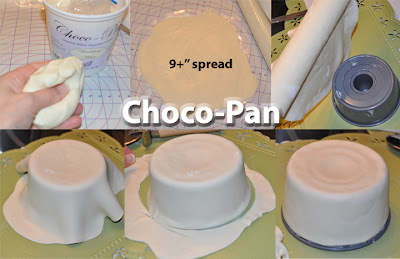 Choco-Pan - One of the top two in TASTE. 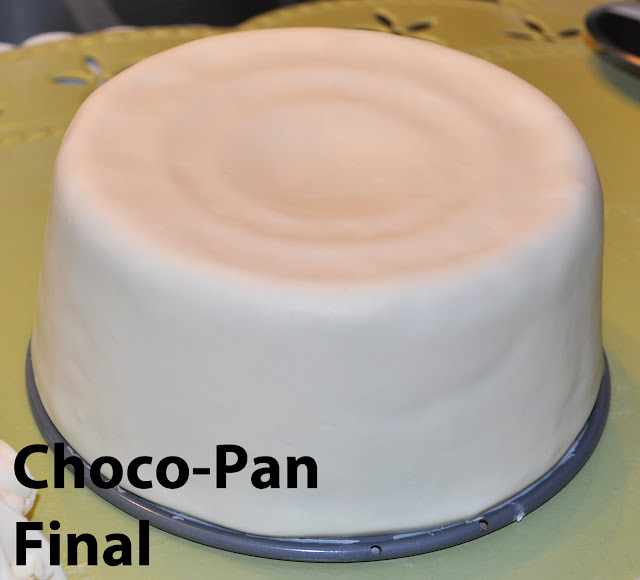 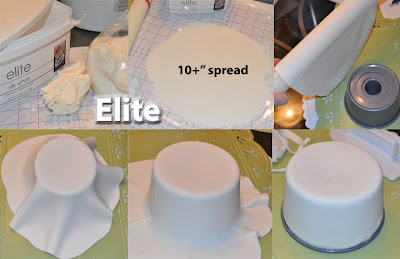 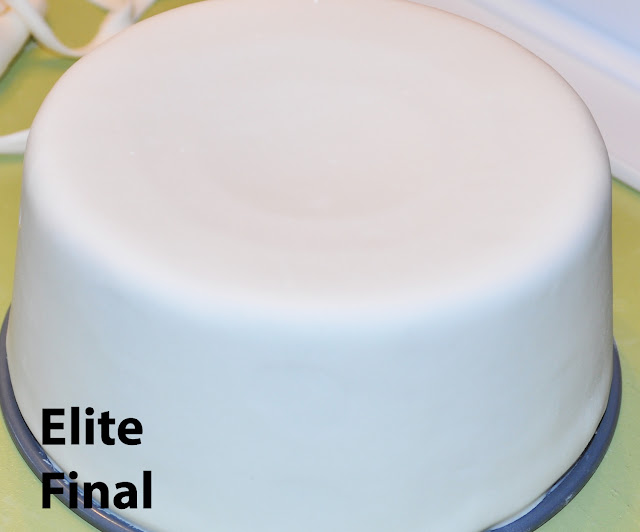 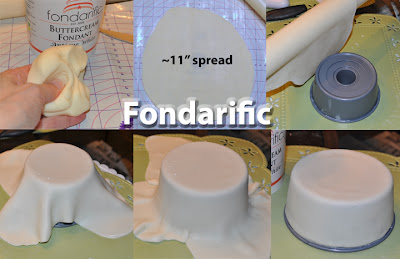 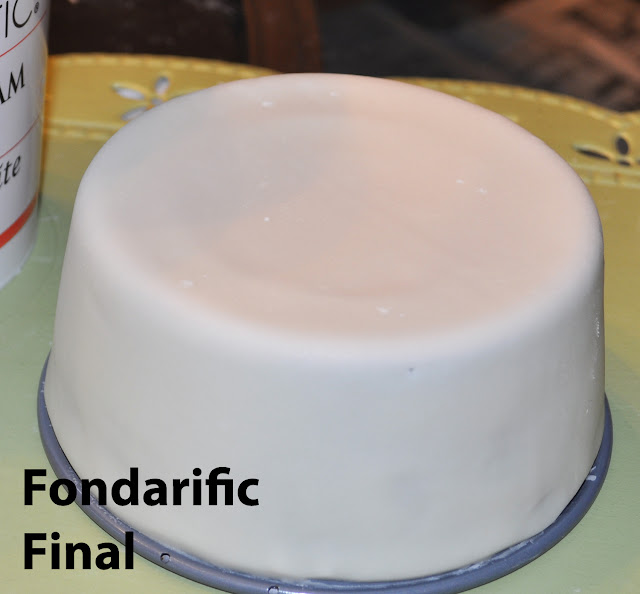 (Sorry about all the spots of corn starch on the Fondarific cake.  I should have brushed them off.) 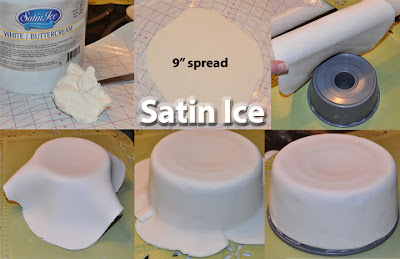 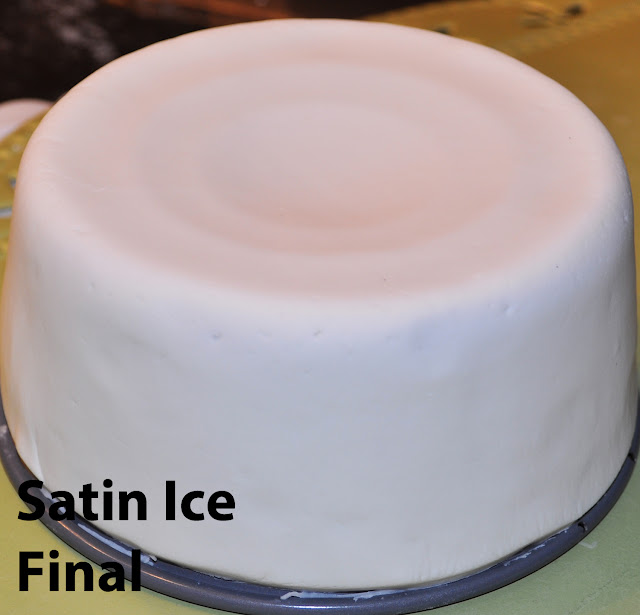 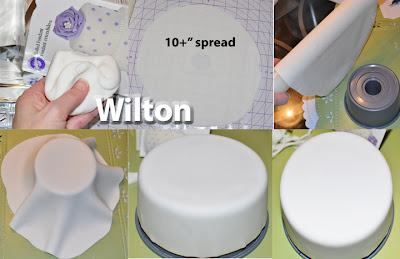 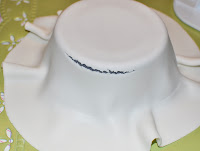 Wilton - Next to Elite, the Wilton brand produced ONE OF THE BEST looking FINISHED cake. 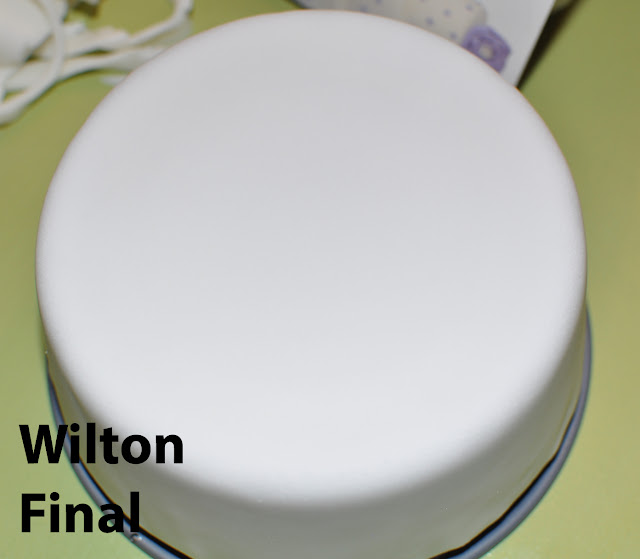 So after all my testing I had no clear winner  :-(

Some brands I rejected outright, but out of the other brands the “winner” would depend on skill level and which is more important: the way the fondant looks or how it tastes.

Pettinice had the best taste (in my opinion), but working with the fondant and getting a perfect finish would take more experience and training on my end. The fact that it dried so quickly also scared me off. When I gain more experience and confidence in my ability to roll and cover a cake quickly, this will be a contender.

Duff Goldman's brand had a good taste, but it did not cut very cleanly and it was also on the expensive side (unless you have a 40% off coupon).

Choco-Pan had a great taste, was easy to work with, and was middle of the pack as far as price. If I had to assign the #1 trophy to any ONE fondant it would have to be Choco-Pan (given my current level of experience).

Elite (Fondx) had a strange chemical taste that didn’t appeal to me, but it was very easy to work with and it produced the best-looking finish. Even in my inexperienced hands the fondant came out very smooth, with hardly an imperfection to be seen. If it weren't for the strange taste this would be the undisputed winner in my "Fondant Games". I will have to try other flavors to see if they all have that strange taste.

Fondarific had just an okay taste, but it was extremely easy to work with and it was also one of the least expensive. But what I really loved about the Fondarific was the LONG shelf life. I don’t make many fondant cakes so it is nice (and cost effective) to buy a big tub of this stuff and not have to worry about it drying out in a few months.

Satin Ice had a bland taste (in my opinion), and it formed a weird elephant-skin texture that was off-putting to me. I also found that as the fondant dried it cracked around the edges of the cake. I may have had a bad batch, or I may have handled it wrong. Does anyone have any words of advice?

Wilton has a horrible taste, and I would never cover a commissioned cake with it, but because it is inexpensive, easy to work with, and produces a smooth finished cake, it is a great option if you are just practicing or making fondant decorations for your masterpiece.  (Note: the Wilton fondant tested is no longer sold.)

As you can tell from the above summary my comparison yielded no clear winner.  In the end I decided to use the Choco-Pan as the fondant to cover my commissioned engagement cake. At this point in time I would probably buy Choco-Pan for any large commissioned cake, but I like keeping the Fondarific on hand to use for any spur-of-the-minute jobs.  And I also like using the Wilton brand to make fondant decorations and flowers.


So many fondants, each with its own Pros and Cons.

The one you pick will depend on your skill, your budget, and what is more important to you – taste or looks.

If you have made it this far in the post I want to wish you Happy Cake Decorating, and I hope my very unscientific review helps you in some small way.