In mid-November I conducted a taste test of Red Velvet Cake recipes (see blog entry here). I baked 8 different cakes and recruited 25 people to sample and rate the entries. The undisputed winner of the Red Velvet Taste-Off : Round 1 was:

For this round I baked three different recipes:

So here are the three cakes all stacked up: 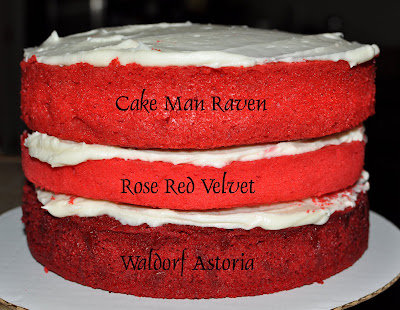 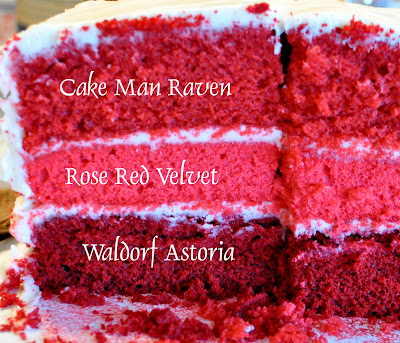 The Waldorf cake came in second and the Rose Red Velvet cake came in third. In this round I only had 9 taste testers, as opposed to the 25 testers in round one. Two of the tasters (the kids) picked the Rose cake as their favorite (they said it was the sweetest), but the other 7 had it as their least favorite. One of the biggest complaints about the Rose RVC was that it was too dry and two people remarked that it had a spongy, angel food cake texture. If you want to see a spreadsheet listing all the results click here.

So after two unbiased tests, the oil based Red Velvet Cake is still reigns as the undisputed favorite.

BUT even as I write this someone handed me yet another RVC recipe. It is Red Velvet time of the year. This one used uses brown sugar instead of white and a 1/2 cup cocoa. I must test this recipe, so stay tuned for round 3 of the Ultimate Red Velvet Taste-Off (some time around Christmas).
Posted by The Bake More at 11:48 AM